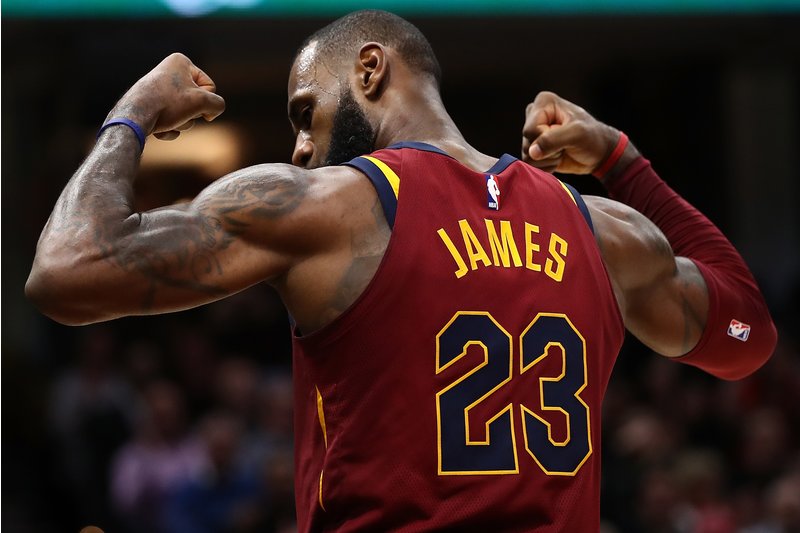 CLEVELAND, OH - NOVEMBER 01: LeBron James #23 of the Cleveland Cavaliers celebrates a second half basket while playing the Indiana Pacers at Quicken Loans Arena on November 1, 2017 in Cleveland, Ohio. Indiana won the game 124-107. NOTE TO USER: User expressly acknowledges and agrees that, by downloading and or using this photograph, User is consenting to the terms and conditions of the Getty Images License Agreement. (Photo by Gregory Shamus/Getty Images)

LeBron James, the best basketball player in the world and one of the most influential athletes on the planet, fights for off-court causes he cares about. In 2017, for example, James starred in Nike’s “Equality” ad campaign, which was released at the outset of the Trump presidency in 2017, following the Women’s March and the President’s executive travel ban that sparked protests across the country. This past summer, James opened a public school for at-risk students in his hometown of Akron, Ohio. He has criticized Trump for using sports to divide the country. Trump responded by questioning James’ intelligence.

Now, James is taking on a new foe: the NCAA. He’s the executive producer of a new documentary, Student Athlete, which debuts on HBO Tuesday at 10 p.m. ET. The film picks apart amateurism in major college sports, a model that allows schools to generate hundreds of millions of dollars in revenues, but prevents the cash from tricking down to the players themselves. Instead, it flows to coaches’ salaries and athletic facilities with barber shops and bowling alleys and flat-screen TVs. (James himself notably skipped college, instead going from high school directly to the pros.)

The hypocrisy exposed in Student Athlete is not new: lawyers are challenging amateurism in the court system, while advocates and media outlets have long

screamed for change. Still, the film –— which was co-directed by Oscar winner Sharmeen Obaid-Chinoy — hits the mark. Over its 88 minutes, Student Athlete packages five stories — on a high school prospect, a former college coach, and three former college players — that show how the system takes its toll. In the opening scene, the viewer meets former Rutgers tight end Shamar Graves, who played for the Scarlet Knights from 2007 through 2009. He’s sleeping in his car.

Student Athlete shines an invaluable light on athletes like Graves, who effectively held an unpaid full-time job while playing his sport in school, managed to earn his degree, but has struggled in his post-college life. Most major college athletes aren’t going pro. Those who sacrificed internships and other career development opportunities in school in order to concentrate on sports may find that the promise of a degree — an education sets you up for life! — falls far short of expectations. A back injury ended the college career of Mike Shaw, a former top-ranked high school basketball prospect who played at the University of Illinois and Bradley University. The film shows Shaw at this graduation ceremony at Bradley. His pro basketball dreams shattered, he’s still hopeful he’ll find his way. We soon learn, however, that Shaw has struggled with his mental health. Shaw shares that he’s rehabbed in a psychiatric hospital.

If the film falls short in one area, it’s in offering solutions for athletes like Graves and Shaw. Yes, the undercurrent is that colleges should pay their athletes. “The thing that’s disgusting,” says John Shoop, a former offensive coordinator at the University of North Carolina and Purdue, “is that coaches are making millions of dollars, and they’re coaching players whose families live below the poverty line.” (Shoop seems to have been blacklisted from the college coaching ranks due to his advocacy for athletes). But not all college athletes would earn lucrative salaries while playing their sports. Graves and Shaw, for example, weren’t stars. If they could have earned money for playing in college, would they find themselves in a better situation today? In recent years, many college graduates have learned that their degrees don’t guarantee stable employment. Is it the obligation of schools to offer full services like post-graduate career training and job placement and health insurance for their athletes? If so, are the schools obligated to do the same for all students?

You can’t blame Student Athlete for largely glossing over the prescriptions for college sports. Quick and easy fixes don’t exist. But the film drops at an opportune time, as college sports are ripe for major reforms. Testimony just wrapped up in the latest anti-trust trial — Alston v. NCAA — challenging compensation caps in college sports. A federal trial that promises to expose the underbelly of college basketball, and resulted from an FBI investigation into under-the-table payments by shoe company representatives and financial advisers to coaches and players, begins in New York this week. College athletes deserve better. Having LeBron James on their team can only help.

CLEVELAND, OH – NOVEMBER 01: LeBron James #23 of the Cleveland Cavaliers celebrates a second half basket while playing the Indiana Pacers at Quicken Loans Arena on November 1, 2017 in Cleveland, Ohio. Indiana won the game 124-107. NOTE TO USER: User expressly acknowledges and agrees that, by downloading and or using this photograph, User is consenting to the terms and conditions of the Getty Images License Agreement. (Photo by Gregory Shamus/Getty Images)