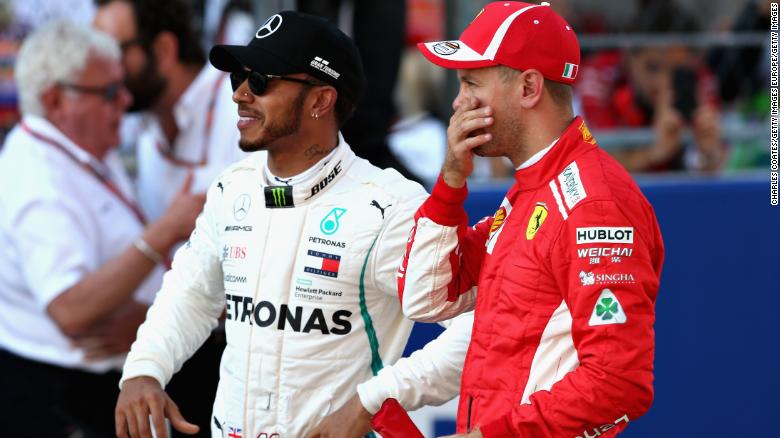 during qualifying for the Formula One Grand Prix of Russia at Sochi Autodrom on September 29, 2018 in Sochi, Russia.

(CNN)Lewis Hamilton says arch rival Sebastian Vettel deserves “more respect” instead of the criticism he has received for his faltering F1 championship bid over the last few weeks.

Vettel’s sixth-place finish at Suzuka, after fighting back from an early collision with Max Verstappen, led some observers to suggest he had “gift-wrapped” the title for Hamilton.

But Mercedes’ Hamilton wrote on Instagram: “I feel the media need to show a little more respect for Sebastian.

“You simply cannot imagine how hard it is to do what we do at our level … It is to be expected that being humans we will make mistakes but it is how we come through them that counts.”

While the gap between Hamilton and Vettel was as close as 17 points at the Belgian Grand Prix in August, Hamilton’s hot streak, coupled with a disappointing set of results for his Ferrari rival, mean the Briton can wrap up his fifth championship title in the U.S. in two weeks’ time.

Victory for Hamilton in Austin would mean Vettel would have to finish second to keep the title race alive.

during qualifying for the Formula One Grand Prix of Russia at Sochi Autodrom on September 29, 2018 in Sochi, Russia.