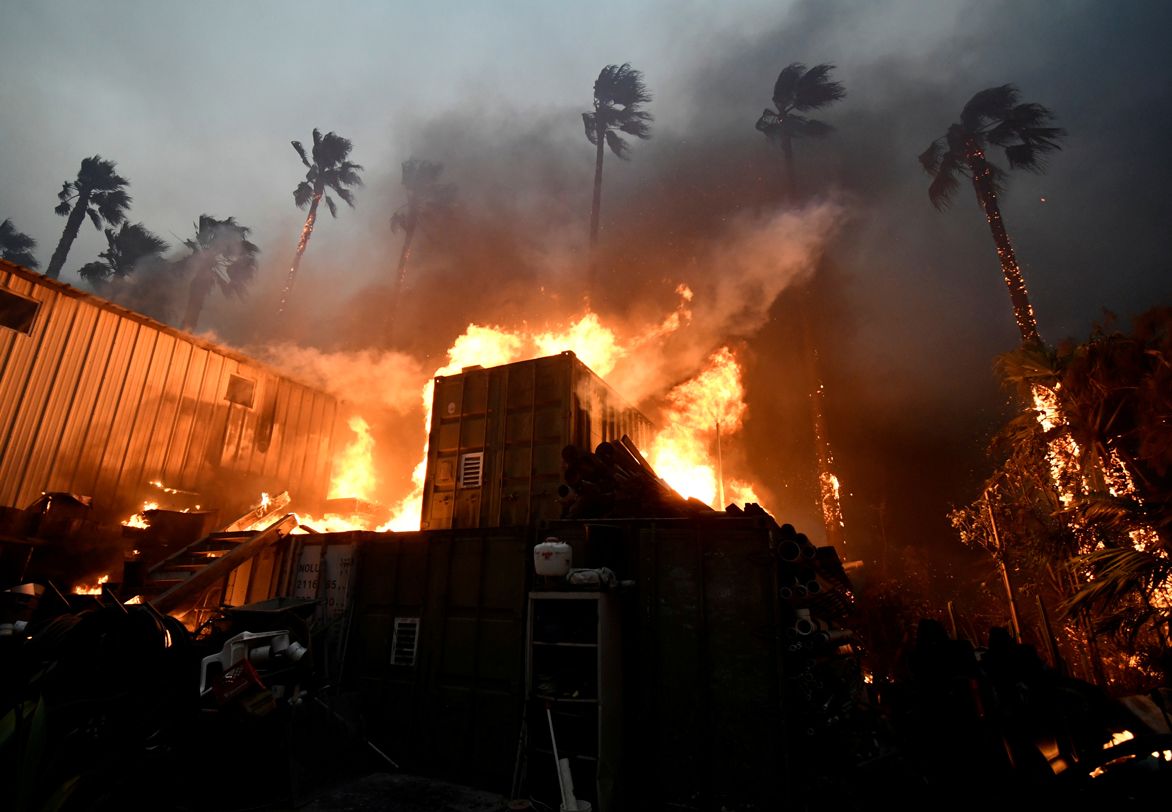 Global warming will happen faster than we think

Prepare for the “new abnormal”. That was what California Governor Jerry Brown told reporters last month, commenting on the deadly wildfires that have plagued the state this year. He’s right. California’s latest crisis builds on years of record-breaking droughts and heatwaves. The rest of the world, too, has had more than its fair share of extreme weather in 2018. The Lancet Countdown on health and climate change announced last week that 157 million more people were exposed to heatwave events in 2017, compared with 2000.

Such environmental disasters will only intensify. Governments, rightly, want to know what to do. Yet the climate-science community is struggling to offer useful answers.

In October, the Intergovernmental Panel on Climate Change (IPCC) released a report setting out why we must stop global warming at 1.5 °C above pre-industrial levels, and how to do so1. It is grim reading. If the planet warms by 2 °C — the widely touted temperature limit in the 2015 Paris climate agreement — twice as many people will face water scarcity than if warming is limited to 1.5 °C. That extra warming will also expose more than 1.5 billion people to deadly heat extremes, and hundreds of millions of individuals to vector-borne diseases such as malaria, among other harms.

But the latest IPCC special report underplays another alarming fact: global warming is accelerating. Three trends — rising emissions, declining air pollution and natural climate cycles — will combine over the next 20 years to make climate change faster and more furious than anticipated. In our view, there’s a good chance that we could breach the 1.5 °C level by 2030, not by 2040 as projected in the special report (see ‘Accelerated warming’). The climate-modelling community has not grappled enough with the rapid changes that policymakers care most about, preferring to focus on longer-term trends and equilibria.

Policymakers have less time to respond than they thought. Governments need to invest even more urgently in schemes that protect homes from floods and fires and help people to manage heat stress (especially older individuals and those living in poverty). Nations need to make their forests and farms more resilient to droughts, and prepare coasts for inundation. Rapid warming will create a greater need for emissions policies that yield the quickest changes in climate, such as controls on soot, methane and hydrofluorocarbon (HFC) gases. There might even be a case for solar geoengineering — cooling the planet by, for instance, seeding reflective particles in the stratosphere to act as a sunshade.

Climate scientists must supply the evidence policymakers will need and provide assessments for the next 25 years. They should advise policymakers on which climate-warming pollutants to limit first to gain the most climate benefit. They should assess which policies can be enacted most swiftly and successfully in the real world, where political, administrative and economic constraints often make abstract, ‘ideal’ policies impractical.

Three lines of evidence suggest that global warming will be faster than projected in the recent IPCC special report.

First, greenhouse-gas emissions are still rising. In 2017, industrial carbon dioxide emissions are estimated to have reached about 37 gigatonnes2. This puts them on track with the highest emissions trajectory the IPCC has modelled so far. This dark news means that the next 25 years are poised to warm at a rate of 0.25–0.32 °C per decade3. That is faster than the 0.2 °C per decade that we have experienced since the 2000s, and which the IPCC used in its special report.

Second, governments are cleaning up air pollution faster than the IPCC and most climate modellers have assumed. For example, China reduced sulfur dioxide emissions from its power plants by 7–14% between 2014 and 2016 (ref. 4). Mainstream climate models had expected them to rise. Lower pollution is better for crops and public health5. But aerosols, including sulfates, nitrates and organic compounds, reflect sunlight. This shield of aerosols has kept the planet cooler, possibly by as much as 0.7 °C globally6.

Third, there are signs that the planet might be entering a natural warm phase that could last for a couple of decades. The Pacific Ocean seems to be warming up, in accord with a slow climate cycle known as the Interdecadal Pacific Oscillation7. This cycle modulates temperatures over the equatorial Pacific and over North America. Similarly, the mixing of deep and surface waters in the Atlantic Ocean (the Atlantic meridional overturning circulation) looks to have weakened since 2004, on the basis of data from drifting floats that probe the deep ocean8. Without this mixing, more heat will stay in the atmosphere rather than going into the deep oceans, as it has in the past.

These three forces reinforce each other. We estimate that rising greenhouse-gas emissions, along with declines in air pollution, bring forward the estimated date of 1.5 °C of warming to around 2030, with the 2 °C boundary reached by 2045. These could happen sooner with quicker shedding of air pollutants. Adding in natural decadal fluctuations raises the odds of blasting through 1.5 °C by 2025 to at least 10% (ref. 9). By comparison, the IPCC assigned probabilities of 17% and 83% for crossing the 1.5 °C mark by 2030 and 2052, respectively.

Scientists and policymakers must rethink their roles, objectives and approaches on four fronts.

Assess science in the near term. Policymakers should ask the IPCC for another special report, this time on the rates of climate change over the next 25 years. The panel should also look beyond the physical science itself and assess the speed at which political systems can respond, taking into account pressures to maintain the status quo from interest groups and bureaucrats. Researchers should improve climate models to describe the next 25 years in more detail, including the latest data on the state of the oceans and atmosphere, as well as natural cycles. They should do more to quantify the odds and impacts of extreme events. The evidence will be hard to muster, but it will be more useful in assessing real climate dangers and responses.

Rethink policy goals. Warming limits, such as the 1.5 °C goal, should be recognized as broad planning tools. Too often they are misconstrued as physical thresholds around which to design policies. The excessive reliance on ‘negative emissions technologies’ (that take up CO2) in the IPCC special report shows that it becomes harder to envision realistic policies the closer the world gets to such limits. It’s easy to bend models on paper, but much harder to implement real policies that work.

Realistic goals should be set based on political and social trade-offs, not just on geophysical parameters. They should come out of analyses of costs, benefits and feasibility. Assessments of these trade-offs must be embedded in the Paris climate process, which needs a stronger compass to guide its evaluations of how realistic policies affect emissions. Better assessment can motivate action but will also be politically controversial: it will highlight gaps between what countries say they will do to control emissions, and what needs to be achieved collectively to limit warming. Information about trade-offs must therefore come from outside the formal intergovernmental process — from national academies of sciences, subnational partnerships and non-governmental organizations.

Design strategies for adaptation. The time for rapid adaptation has arrived. Policymakers need two types of information from scientists to guide their responses. First, they need to know what the potential local impacts will be at the scales of counties to cities. Some of this information could be gleaned by combining fine-resolution climate impact assessments with artificial intelligence for ‘big data’ analyses of weather extremes, health, property damage and other variables. Second, policymakers need to understand uncertainties in the ranges of probable climate impacts and responses. Even regions that are proactive in setting adaptation policies, such as California, lack information about the ever-changing risks of extreme warming, fires and rising seas. Research must be integrated across fields and stakeholders — urban planners, public-health management, agriculture and ecosystem services. Adaptation strategies should be adjustable if impacts unfold differently. More planning and costing is needed around the worst-case outcomes.

Understand options for rapid response. Climate assessments must evaluate quick ways of lessening climate impacts, such as through reducing emissions of methane, soot (or black carbon) and HFCs. Per tonne, these three ‘super pollutants’ have 25 to thousands of times the impact of CO2. Their atmospheric lifetimes are short — in the range of weeks (for soot) to about a decade (for methane and HFCs). Slashing these pollutants would potentially halve the warming trend over the next 25 years10.

There has been progress on this front. At the Global Climate Action summit held in September in San Francisco, California, the United States Climate Alliance — a coalition of state governors representing 40% of the US population — issued a road map to reduce emissions of methane, HFCs and soot by 40–50% by 2030. The 2016 Kigali amendment to the Montreal Protocol, which will go into force by January 2019, is set to slash HFC emissions by 80% over the next 30 years.

Various climate engineering options should be on the table as an emergency response. If global conditions really deteriorate, we might be forced to extract large volumes of excess CO2 directly from the atmosphere. An even faster emergency response could be to inject aerosols into the atmosphere to lower the amount of solar radiation heating the planet, as air pollution does. This option is hugely controversial, and might have unintended consequences, such as altering rainfall patterns that lead to drying of the tropics. So research and planning are crucial, in case this option is needed. Until there is investment in testing and technical preparedness — today, there is almost none — the chances are high that the wrong kinds of climate-engineering scheme will be deployed by irresponsible parties who are uninformed by research11.

For decades, scientists and policymakers have framed the climate-policy debate in a simple way: scientists analyse long-term goals, and policymakers pretend to honour them. Those days are over. Serious climate policy must focus more on the near-term and on feasibility. It must consider the full range of options, even though some are uncomfortable and freighted with risk.