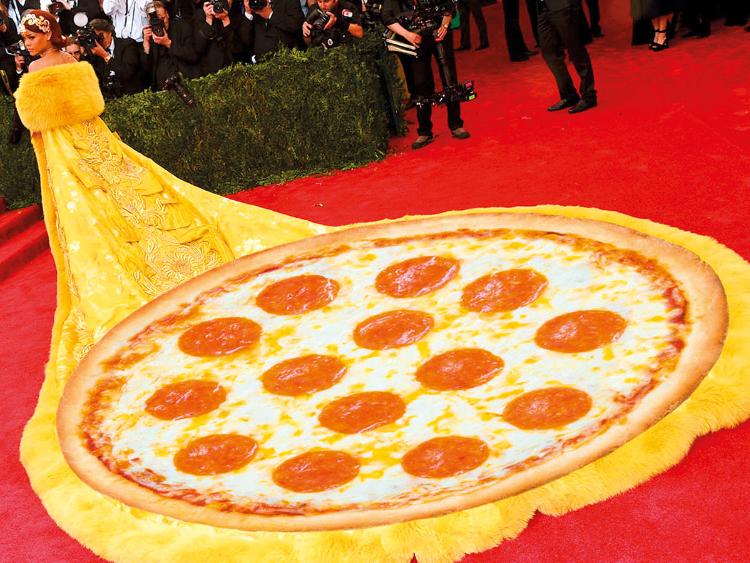 The rise and rise of the fashion viral

I have never worn anything that could be considered “online content”. And, to the best of my knowledge, I have never gone viral. That is until one spring morning, enjoying a snack by the canal, alone save for the ducks, I realised someone on the bridge was taking a photograph of me. I glanced down at the dress I had on — less a dress, actually, and more a length of elegant bedding — and realised I had never looked more shareable.

The elegant bedding in question was a vast, diaphanous day gown by London-based designer Emilia Wickstead, from her spring/summer 2019 collection. It comes with a coif cap in the same 18th century-style print and there is a train, of sorts, which billows underfoot, and holes within the folds for my hands.

It is gorgeous to wear, like weighted swaddling — until the breeze inflates the whole thing like a balloon. Still, with the right Photoshop tinkering, a pithy caption and an Instagram account, it could easily morph into a visual gag — a giant eiderdown, a pair of curtains or, with the headpiece, a chintzy version of a Handmaid’s dress. In short, this is a dress that could become a meme.

If you use social media, you will have seen a meme on Instagram or laughed at one on Facebook, even if you don’t really know what it is. This is forgivable — it has become amorphous as a term — but the original concept dates back to 1976, when the word was coined by evolutionary biologist Richard Dawkins in his book The Selfish Gene. He took it from the Greek root “mimeme” (“that which is imitated”), shaved it into a neat monosyllabic word to make it snappier (you know, like a meme) and used it to describe a unit of cultural transmission that shows the spread of ideas or culture.

Nowadays anything can become a meme, be it an idea, song or theory; a lolcat, distracted boyfriend or dancing Alexandria Ocasio-Cortez. The successful ones are hard to predict — it’s usually about flinging something against the wall and seeing what sticks. But occasionally one sticks so well, it goes viral. And often these come from fashion. Consider the following: Angelina Jolie in Versace at the 2012 Oscars, flashing her right leg, a stance that bore memorable memes such as “Jolie’ing” and leg-bombing. Or Rihanna’s yolk-yellow 2015 Met Gala outfit, dubbed “the omelette dress” for its resemblance to breakfast. Quickly memeified, the viral attention put designer Guo Pei on the map.

The fashion-meme industry relies on two things: designers to make meme-friendly pieces and social media whizzes to turn them into memes. If fashion finds beauty and profit in designing familiar objects in an unfamiliar way, then placing high-fashion in a non-fashion context is the next logical step. Accounts such as @freddiemade and @siduations are probably the best examples of fashion meme makers, with both using a sort of cut-and-paste recontextualisation method. Say model Bella Hadid in Versace trainers “running” a marathon, a plastic-caped Balenciaga model superimposed into that apartment scene in American Psycho, or Viktor & Rolf couture Photoshopped with the head of Fyre festival’s Andy King from the Netflix documentary. It’s these gags that make their work chime with a demographic who live their lives — and tell their jokes — online.

It might seem cynical, but right now, if you were to pit the dress on the catwalk against the dress in some sort of witty meme-y context, you’d get more likes for the latter. Humour is integral — partly because, to use the correct parlance, it provides that crucial “if you know, you know” lol. Instagram artist Hey Reilly , who’s had his illustrations on the catwalk through a collaboration with Fendi, explains: “I look for a hit in the image that reflects a sense of almost subconscious recognition in the viewer. An effective route to this jolt is by playing around with recognised fashion and celebrity imagery: it gets me lolling and hopefully others, too.”

With the fashion landscape so crowded, the ability of these memes to cut through our daily barrage of images hasn’t gone unnoticed by brands. Now, the most successful designers aren’t avoiding the viral end of pop culture. Instead, they’re actively trying to create something meme-friendly, an “it” item that piques our interest and sets the internet on fire.

Under Demna Gvasalia, Balenciaga is a leader of memeable fashion — see last year’s layered anoraks recalling a memorable Joey Tribbiani scene from Friends — as many memes on social media happily pointed out. In 2017, Marc Jacobs even collaborated with Instagram bootlegger @avanope on a T-shirt collection that looked like bad market stall copies of Jacobs’ work, and showcased her in-joke irony to a new — and in the know — audience. Gucci is in on it as well: the models carrying casts of their own heads, as they did for SS18, were arguably more memorable — and certainly more memeable — than the clothes themselves.

Even more sober houses such as Valentino have been pulled into the viral ecosystem. Any designer who showed a long red gown recently could have found their work superimposed on to a scene from the TV version of The Handmaid’s Tale, and became a totem for women’s rights. For pre-autumn, Valentino’s collection had 33 head-to-toe red looks, begging for Eli sabeth Moss’s bonneted head to be Photoshopped in. Whether or not it was designed with woke memes in mind is unclear, but it certainly lends itself to the genre.

This season, meme-friendly fashion continued. See the supersized bag that dwarfed models at Jacquemus, a ginormous wide-brimmed hat at Valentino, giant bows at Marc Jacobs and half of Jeremy Scott’s collection for Moschino — which reworked a sewing basket’s contents into designer dresses.

Intentional or not, creating clothes that become memes is a sure-fire way to set yourself apart from the old guard. With around 60 per cent of luxury customers of a millennial age, clicks not only lead to sales: as a marketing strategy, they are arguably more important for getting your brand out there. “Designer brands are gradually realising they must lose their haughty image if they want to sell their clothes to a generation consumed by the internet,” says Holly Friend, foresight writer at The Future Laboratory.

If comparing a coat or dress with a cat meme seems reductive, it certainly gives the label an edge. For Moschino designer Jeremy Scott, this is no bad thing. “For something to be meme-worthy, sure, it could be a negative,” he says. “But what I do is playful. If you can’t find something funny around it, well, oh dear you.”

Designer brands are gradually realising they must lose their haughty image if they want to sell their clothes to a generation consumed by the internet.

For Simon Porte Jacquemus, of hip French label Jacquemus , it goes with the territory. “I often start [designing] with a specific photograph,” he says. “And when I think of the silhouettes, I think of styling from the beginning. I also see how clothes would look through a screen. I come from a digital generation.”

With his giant hats and postcard-backdrop shows, Jacquemus is arguably the crown prince of meme-friendly fashion. His infamous 2018 La Bomba hat is already a classic and he obviously approved of its online reception — if its sequel, SS19’s equally mega-bag , is anything to go by. The element of absurdity, the fact that they photograph well and their being — like Wickstead’s dress — larger than life helped make them deliciously memeable.

Still, memes paraded on the catwalk, or your Instagram feed, are one thing. But let’s not forget these are clothes and meant to be worn. If you put on that hat in public, you’d probably block out the sun. As for the Jacquemus bag, imagine wedging it into an easyJet locker. This stuff looks funny, but isn’t easy to wear.

I should know, having spent the best part of the morning in a floor-length Moschino gown covered in three-inch gold needles. Sure it’s elegant, and riffs on a Franco Moschino original, but, like the most memorable pieces from Scott’s show, it is more than a dress: it’s a cartoon, a commentary, riffing on the idea of fast fashion. It even comes with a thimble to wear on your head. And given it weighs 20 kg and takes two people to lift it off the hanger, it’s unwearable. The hat falls off as soon as you move. You carry the entire weight of the dress on your shoulders. But it is designed to be seen, and photographed, and shared on social media rather than to walk down the street. By wearing it, I’m showing I’m in on the joke.

The next day, my shoulders still sore, I take it down a notch by moving from the Moschino dress into a monochrome Erdem look, which by contrast is normality itself. The cape hangs beautifully, allowing air to circulate. The trousers are stiff but wearable. The beekeeper’s veil — yep — would be essential wearing if I worked in a hive. Standing on a street that is bee-free, I wonder what would compel me to wear a delicate veil like this in public and realise nothing, save a funeral. Until I see myself transplanted on to a meme, at which point it all makes sense.

Scott was making a salient point about the fashion industry when he designed his collection but he’s also well aware of the shareability of his designs. I put this point to Dawkins. He claims he had fashion in the back of his mind when he came up with the term meme. “Changing styles and the epidemic spread of trends — people noticing what someone is wearing and copying it and that being repeated over and over — this is the ideal medium for illustrating how a meme works.”

Labels that meme well arguably do well, too. Kering, the conglomerate that owns Gucci and Balenciaga, gets over half its revenue from meme-happy millennials, suggesting there is financial method in them. In 2016, Instagram — where memes thrive — claimed a third of its then 500 million users, 90 per cent of whom are under 35, had bought clothing through the social network.

But it’s also about lifting clothes out of their safe space, into the gaze of a wider audience. Part of the reason Demna Gvasalia’s Balenciaga gets so much attention is because it turns fashion into a cultural moment, as with the recontextualising of a Bernie Sanders logo on to a scarf (AW17) or a computer font into a print (SS19). This is outward-facing fashion. Gvasalia actively wants to be part of the cultural conversation, and knows some of that is communicated through the language of memes.

I suspect Wickstead — a designer more at home in the rarefied environs of Kensington Palace than a meme — would probably be horrified that I compared her dress to a duvet. But Gvasalia is regularly accused of trolling his own customers with designs such as the infamous T-shirt with a DHL logo, sold for £185, and his customers are A-OK with that. This sort of ironic publicity is the bread and butter of the industry now and we want to participate in it. “By creating, sharing or buying these products, we can demonstrate our alliance to internet culture,” Friend says. “After all, we want to be in on the joke.” Even if that means we become the joke.