Latest Blogs
Home CELEBRITIES Manoukian’s journey: Art at home, in war and after 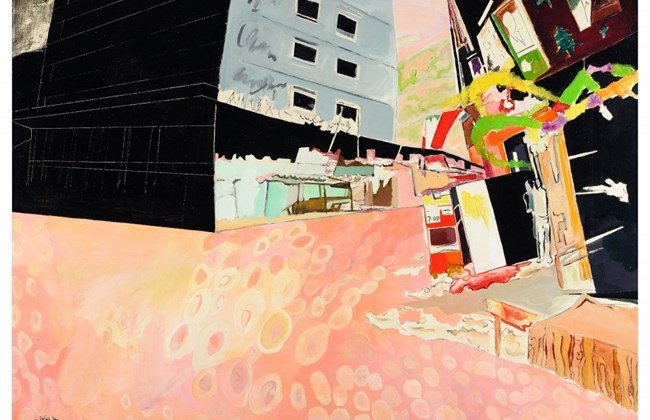 Manoukian’s journey: Art at home, in war and after

The Lebanese artist hasn’t lived in Lebanon for 20 years, but she visited Beirut this month for the launch of “Seta Manoukian: Painting in Levitation.” Published in partnership with the Saradar Collection, the latest volume from Kaph Books is a hefty look through Manoukian’s career and evolution.

Born in 1945 to a family of Armenian origin, Manoukian took up painting at an early age before heading to Rome in 1963 to study at the Accademia di Belle Arti.

Upon returning to Beirut in 1967, she became a rising figure in the burgeoning local art scene, with much of her early work focused on the interior of her bedroom, in her family home in Zoqaq al-Blat.

“The bedroom was important because it was my room and it was a space that is closest to me,” Manoukian told The Daily Star.

“It’s your place. When you sit, have reflections or when you are sick, you are in your room.

“It is an intimate place and if you think about it you’re there a lot of the time and it begins to reflect you,” she added. “The room was about knowing myself. You can’t paint properly if you don’t know yourself and it was the most important phase. After knowing yourself, you can understand other people.”

Manoukian was teaching at Lebanese University when the Civil War began in 1975. She continued to paint during the 15-year conflict, producing pieces that differed significantly to her prior work.

“When the war started my subject was more about the streets,” she said. “The shift was easy because everything was happening in the streets and it was time to see that I was the same as everyone else and having the same experience, passing through the same trauma.

“Before the war I was very depressed with what was happening in the Arab world, so there was not much color in my art,” she said.

“I had a spiritual experience just before the war started and all the colors started shining before my eyes. … This is why during the war my art had strong, contrasting colors.”

Where her early pieces were usually in muted grays, whites and pale blues, her wartime works deployed red, lemon yellow and lilac hues.

Manoukian remained in wartime Lebanon for a decade, then fled to Los Angeles (her present home) where she became a Buddhist nun.

“It involves your whole being because Buddhism is a science of the mind and doesn’t recognize a creator,” she said.

“For me it started with essential questions I was asking when I was 20 or 21 years old … I didn’t know it at the time but in retrospect it involved a lot of Buddhist thinking.

“You can’t separate my artwork from the questions we have,” she added. “Humans always have questions and artists above all have questions. We can’t live floating without wondering where we come from, what is awareness, what is life and after death.”

Manoukian’s work is currently focused on organic forms and shapes, which she began exploring after moving to America. “My work after the war has its own importance,” she said. “Now I am working with forms full of life-giving things like blood and milk, bread.

“When you come out of war you’re attracted to nature,” she added, “because it’s healing and we forget about it during wars.”

The book includes a detailed conversation with art historian Kristine Khouri, a chronology of Manoukian’s life and an insightful biographical preface by art historian Gregory Buchakjian.

Manoukian had stopped painting after becoming a nun. During her conversation with Khouri she recalls the moment in 2016 when she took up her paintbrush again.

“I started having recurring dreams in which I’d see a friend, who in reality is not an artist, painting in a studio, then I’d visit him, and the paintings I saw were my paintings, but he was the artist,” she said. “I started seeing the works in my mind, so I knew I was ready to return to painting … I had to listen to the call.”