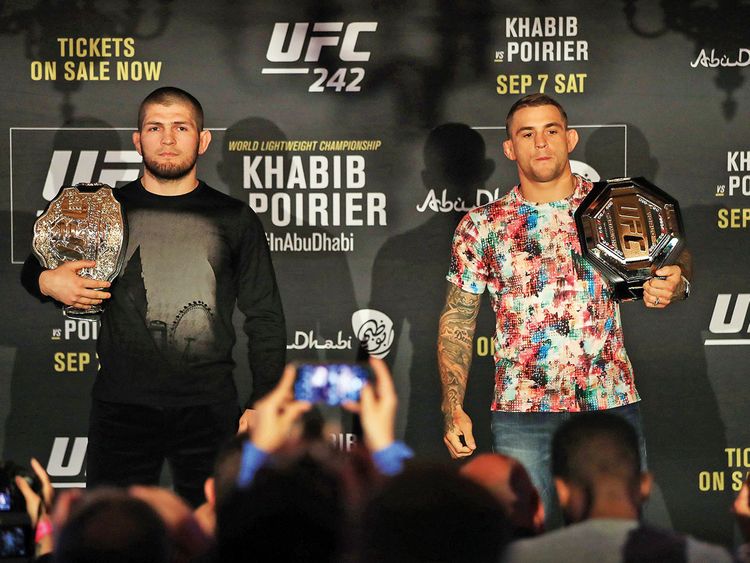 The UAE is no stranger to high-level mixed martial arts (MMA), having hosted events in 2010 and 2014 but Saturday’s Ultimate Fighting Championship (UFC) 242 card at The Arena in YAS Island, Abu Dhabi, is easily the biggest of them all.

‘The Arena’ was constructed just for the event to host a mouth-watering 12-fight card where the showpiece event is for the world lightweight championship. What’s even more exciting about this marquee fight is that it signals the return of UFC lightweight champion Khabib Nurmagomedov, the man who silenced Conor McGregor to remain unbeaten on 27 appearances in the feared octagon.

Challenging his for the crown is Dustin Poirier, one of the most exciting fighters in the sport, who believes that he can be the first man to stop the mighty Russian, who as a 10-year-old used to wrestle with bears in his native Dagestan in Russia.

History will also be made at Abu Dhabi when two women’s bouts will be staged for the first time in the region.

So, what is the UFC?

With more than 300 million fans worldwide, including 70 million social media followers across all of its digital platforms, UFC’s programming is broadcast in over 170 countries and territories to more than one billion TV households worldwide in 40 different languages. The UFC produces events worldwide that showcase 12 weight divisions that abide by the Unified Rules of Mixed Martial Arts.

The first event was held in 1993 at the McNichols Sports Arena in Denver, Colorado. The purpose of early UFC competitions was to identify the most effective martial art in a contest with minimal rules and no weight classes between different fighting disciplines such as boxing, Brazilian jiu-jitsu, sambo, wrestling, Muay Thai, karate and judo.

The evolution continued and in subsequent events, fighters began adopting effective techniques from more than one discipline that directly helped create an entirely separate style of fighting known as the present MMA.

In 2016, UFC’s parent company Zuffa was sold to a group led by William Morris Endeavour (WME-IMG) for $4.025 billion making it among the largest transactions in sports history.

With a TV deal and expansion in Australia, Asia and Europe, and new markets within the US, the UFC has increased in popularity while getting greater mainstream media coverage. The promotion has brought in a total revenue of $609 million (Dhs 2.24 billion), while its next domestic media rights agreement with ESPN has been valued at $1.5 billion over a five-year term.

How did it all start?

In the early 1990s, Art Davie proposed to John Milius and Rorion Gracie an eight-man single elimination tournament called ‘War of the Worlds’. The tournament also featured martial artists from different disciplines facing each other in a no-holds-barred combat to determine the best martial art.

Davie drafted the business plan and 28 investors contributed the initial capital to start WOW Promotions with the intent of developing the tournament into a television franchise.

Since 2001, Dana White has been the president of UFC while growing it globally into a multibillion dollar enterprise.

In those early days, the UFC went along with the tagline :‘There are no rules’. However, they did operate with limited rules that banned biting and eye-gouging while allowing techniques such as hair pulling, headbutting, groin strikes and fish-hooking.

The violent nature of the sport drew the attention of the US authorities with Senator John McCain leading a campaign to ban UFC while calling it ‘human cockfighting’. At that time, at least 36 states banned this new mode of fighting. The UFC saw the need to reinvent while cooperating with state athletic commissions and re-design of rules that knocked off the less palatable elements from the fights and retaining the core elements of striking and grappling.

Slowly, weight classes were introduced and the use of gloves became mandatory, while kicks to the head of a downed opponent were banned. By UFC 15, there were limitations on hair pulling, a ban on strikes to the back of the neck and head, headbutting, small joint manipulations and groin strikes. By UFC 21, the competitions had five-minute rounds introduced and it gradually evolved as a sport rather than as a spectacle.

However, by the early 2000s SEG stood on the brink of bankruptcy. But Station Casinos executives Frank and Lorenzo Fertitta and their business partner Dana White approached them with an offer to purchase the UFC. In January 2001, the Fertittas bought the UFC for $2 million and created Zuffa LLC as the parent entity controlling the UFC.

Slowly the UFC rose in popularity and the cable pay-per-view, home videos and DVD releases made a return. UFC 40 proved to be the most critical event of the Zuffa era with the event a near sell-out of 13,022 at the MGM Grand Arena while posting 150,000 pay-per-view buys. With increased visibility, the UFC’s pay-for-view buy numbers exploded with UFC 52 drawing an audience of 300,000 and by UFC 57, this number had gone up to an estimated 410,000 pay-per-view buys and further up to 620,000 at UFC 60. The sport really hit the ceiling of more than 1 million buys at UFC 66 that pitted Tito Ortiz in a rematch against Chuck Liddell.

The next step was the popularity of the sport among the sports betting community, and it was at this juncture that by 2007, the UFC would surpass boxing for the first time in terms of betting revenues. The UFC continued its rapid growth with Roger Huerta gracing the cover of ‘Sports Illustrated’ and Chuck Liddell went on the front of ESPN The Magazine in May 2007.

The first UFC event to be held outside the US was UFC 8 in Puerto Rico, in 1996. Subsequently, UFC has visited 15 countries in Europe, Oceania, South America, North America and Asia — that included a couple of stops in Abu Dhabi. Japan was the first Asian country to host UFC in 1997. Of the two visits in the UAE, the first one was the UFC 112 in 2010 and the second was in 2014 for UFC Fight Night: Nogueira vs Nelson.

Rules of the game

Rounds: UFC matches vary in maximum length depending on whether the match is for a championship title or a fight card’s ‘main event’. In all fights, each round can be no longer than five minutes with championship fights lasting for a maximum of five rounds. Non-main event bouts last for a maximum of three rounds, but some bouts can go to a fourth sudden-victory round if the two fighters are tied. There is a one-minute rest period between rounds.

The bouts are staged in an eight-sided enclosure officially called ‘The Octagon’. Originally, SEG trademarked the concept as well as the term to prevent other MMA promotions from using the same type of cage. But in 2001, Zuffa gave permission for other promotions to use octagonal cages, reasoning that the young sport needed uniformity to continue to win official sanctioning. Zuffa, however, has reserved the exclusive use of the name ‘The Octagon’.

The UFC cage is an octagonal structure with walls of metal chain-link fence coated with black vinyl. The standard octagon has a diameter of 30ft with a 6ft-high fence. The cage sits atop a platform, raising it 4ft from the ground. It has foam padding around the top of the fence and between each of the eight sections. It also has two entry-exit gates opposite each other. For smaller venues and events, the UFC often uses a smaller cage with is only 25 feet across.

A match may end via a number of situations.

Submission: A fighter clearly taps the mat or his opponent, or clearly communicates being in pain. A technical submission may be called when a fighter either loses consciousness or is on the verge of serious injury while in a hold.

Knockout: A fighter is put into a state of unconsciousness resulting from any legal strike.

Technical Knockout (TKO): If the referee decides a fighter cannot continue, the fight is ruled as a technical knockout. TKOs can be classified into three categories — referee stoppage, doctor stoppage and corner stoppage.

Judges’ decision: Depending on scoring, a match may end in three ways.

Unanimous decision: All three judges score a win in favour of one fighter.

Majority decision: Two judges score a win for one fighter and one judge scores a draw.

Split decision: Two judges score a win for one fighter and one judge scores a win for the other.

Technical decision: A fighter is rendered unable to continue as a result of an unintentional illegal element or move, resulting in a decision based on the finished and unfinished rounds if the number of rounds to be judged is sufficient.

Technical draw: the bout ends in a manner similar to that of a technical decision, with the judges’ scores resulting in a draw.

Disqualification: A fighter intentionally executes an illegal move that is considered by the referee or opponent to be injurious or significant enough to negatively alter the opponent’s performance should the fight continue, resulting in the opponent’s victory.

Forfeit: A fighter fails to compete or intentionally and prematurely ends the bout for a reason besides injury, resulting in the opponent’s victory.

For those interested in taking advantage of the visa-free policy, it should be carefully noted that the initiative applies only to international transits, i.e. passengers holding connecting tickets to a third country or region.

5 Reasons To Go With TOP for All Online Reputation Repair.

4 Benefits To Partnering With TOP Platform For Translation Services Work.

3 Simple Benefits for Advertisers to Registering with TOP.

Best Way To Sell Photos From Home For Cash.

TOP Gives A New Opportunity To Earn With Its Ebooks Library.

Trust TOP To Help Repair Your Online Reputation At Any Time.

One Quick Way To Take Care Of Online Reviews.

2 Benefits You Get When Partnering With TOP For Online Reputation Building.

The Best Way To Go About Finding FDI? To know more >> Theinternationalcampaigner.com

Where To Start For Trying To Make Money Online As A Trender.

THE ROLE OF SOCIAL MEDIA IN ONLINE LOBBYING.

With TOP You Can Find Expert Service For Press Release Distribution.

About Search Engine Optimization “SEO”: What does it involve?!

4 Ways TOP Platform Can Help You Grow Your Business.

The Importance of Online Translation Sites.

How to attract Foreign Direct Investments (FDI) in a country.

How To Find The Right Influencer.

Canada expects a 40 per cent increase in citizenship among immigrants by 2024 .