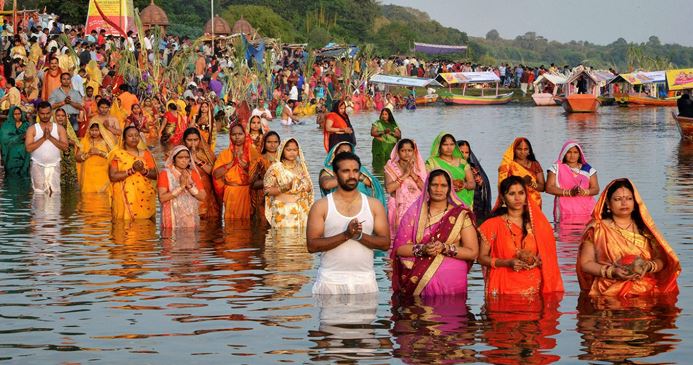 The rituals associated with the Chhath festival have begun from today.
Chhath is a festival mainly dedicated to the Sun God. It is a cultural and religious festival that indicates to the human civilization and an occasion for expressing gratitude to nature. The sun is especially worshiped amidst various rituals and by making different kinds of offerings.

Today, devotees are observing the arba-arbain ritual. This ritual is also called nahaya-khaya. The devotees start observing fast from this day abstaining from eating meat and fish, onion, garlic, millet and yellow lentils. They take holy dips in ponds and rivers on this day in the early morning and start the fast.

On the second day (Panchami), the kharana ritual is observed, which is also known as ‘diluting away the sins’. The place where the Chhath rituals are conducted is daubed with a mixture of cow dung and water.

A paste prepared by mixing the Arba rice flour and holy water is sprinkled over the place and the altar for performing the Chhath rituals is anointed. The devotees observe a complete fast on this day even without drinking water. They offer payas (rice pudding) to the moon after moon rise and partake this offering.

On the third day of the festival (Shasthi), various delicacies are prepared out of the flour of rice and wheat grains grinded in traditional grinders (okhal, jaanto or dhiki). All the members of the family go to the assigned water body, ponds or the bank of the river, carrying a variety of offerings, amidst the singing of devotional and folk songs.

The offerings include the delicacies like thakuwa, bhusawa, khajuri, perukiya; fruits like coconut, orange, banana, citrus fruits; and other articles as nanglo, koniya, saraba, dhakan, elephant terracotta idol. These offerings are all carried in a big basket.

Before placing the offerings on the bank of the river or pond, the devotees prostrate five times in front of the spot and the offerings. The members of the family draw the ‘aripan’ sketches as per the tantric methods at the place beforehand to sanctify it. Thereafter, the devotees step into the water of the pond and river and worship the setting sun for making the offerings.

The parvan rituals are observed on the fourth day or the last day of the Chhath festival. On this day, the devotees go to the bank of the pond or river to the place which is specially anointed for the rituals in the early morning. They repeat the rituals conducted in the previous evening and make offerings of argha to the rising sun. After done with the argha rituals, the devotees listen to the chanting of the Surya Purana scripture by the priests. They also listen to and narrate the story related to the Chhath fasting.

Chhath is such a festival in the world considered as an attractive custom of the tradition of worshipping the sun in which both the rising and setting sun is worshipped and presented different offerings.

As per the oriental philosophy, human civilization developed on river banks and the sun and water are the most essential elements out of the five main elements that sustain life on the Earth. The Chhath festival is an occasion to pay obeisance to these five elements. Sun worship is the main theme of this festival and it embodies the message of mutual goodwill, unity, and co-existence. The sun is the basis of the existence of life, nature, planets, constellations, time and epochs.

The festival also celebrates the life-sustaining energy of the sun and the Chhathi goddess. So both the sun god and chhathi goddess are worshipped during the Chhath festival. Worshipping the male and female form on this occasion means showing respect to the natural form of creation of life on this Earth. The sun is also considered the god of health and prosperity. The fasting observed during this festival is considered one of the most rigorous of fasting.

The Chhath festival which used to be marked only in the Mithilanchal region before is now celebrated in the hilly areas and other regions as well. Its popularity is growing in Nepali society these days.

3 Great Benefits For Writers In Content Creation To Join With TOP.

Earn For Photos By Signing Up With TOP To know more >> https://topphotosgallery.com/ .

Find One Of The Best Ebooks Libraries With TOP

Get Started With Earning For Posting On Social Media. To more click >>> Theinternationalcampaigner

How Should Governments Go Seeking Out Investors For Foreign Direct Investment?.

3 Ways TOP Platform Can Help You With Online Lobbying.

TOP Is Where To Turn For Public Relations Help.

3 Reasons To Go With TOP For Social Media Marketing Help.

Online Reputation Repair: How Does It Work?

The strangest and most alarming things in WeWork’s IPO filing.

US trade deficit narrows less than expected to $54 billion