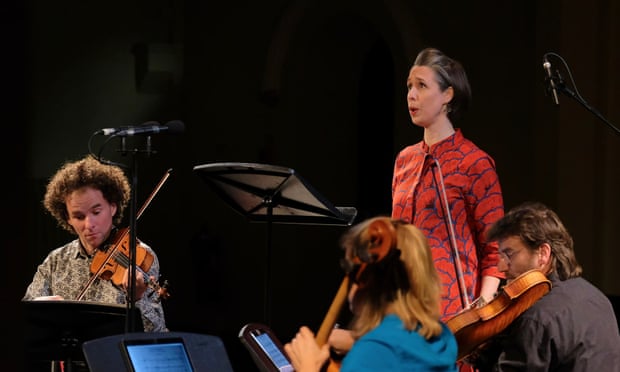 Huddersfield contemporary music festival’s latest programme features “subtle, low-key innovations from many of modern music’s most daring artists” states its artistic director Graham McKenzie. There are a few well-known names dotted through the 10 days of concerts, installations and talks, but even the most clued-up followers of what is happening in the broad church of contemporary music today might be unfamiliar with many of the composers represented. “The overlooked, the unheard,” asserts McKenzie, “are the voices to listen to if we want to build a more equal society. After all, what is a festival if not a celebration of the multiplicity of voices and approaches to sound, art, and music”.

So the composer-in-residence at Huddersfield this year is the Swedish Hanna Hartman, whose works are constructed with recordings of natural sounds that she has collected and amplified sounds generated from everyday objects, while the first composer to feature in a portrait concert during the opening weekend was the Irish Ann Cleare, three of whose pieces were played by the Riot Ensemble, conducted by Aaron Holloway-Nahum.

Cleare’s music is concerned with space, and with defining the environment in which it is performed. The three pieces in the Riot Ensemble concert often suggested affinities with late Nono: in On Magnetic Fields two violins on either side of the hall exchanged fragments of music while electronic sounds filled the void between them, while Eyam iv (Pluto’s Farthest Moons) placed a contrabass flute centre-stage, with the rest of the ensemble dispersed around the hall responding to it as well as triggering more electronic sounds.

It’s elaborate but meagre music, and there was even more etiolation in the Riot Ensemble’s second programme, which reached its extreme form in Evan Johnson’s overlong Linke Hand eines Apostels, for harpsichord and ensemble, an HCMF commission receiving its first performance. It’s a response to Durer’s intensely detailed sketch of the same name, though none of that background was explained in HCMF’s typically obtuse programme notes, which generally this year seem intended to make works more impenetrable than they really need to be. At least Lisa Streich’s Zucker, for “motorized” ensemble, in which its tiny motors attached to the strings and piano create a ghostly background as they stroke the strings, had an intriguing charm of its own, and crucially, too, never outstayed its welcome.

If none of these pieces was a convincing example of a new voice that should be listened to, according to McKenzie’s prescription, what lingered most in the memory was the concert that launched the festival, which was one that could have graced any Huddersfield programme in the last 40 years. It was given by the Sonar Quartett and the soprano Juliet Fraser, and featured premieres of two works for voice and string quartet – an HCMF commission from Naomi Pinnock and the first UK performance of Heinz Holliger’s Increschantüm, a song cycle from 2014 to Romansch texts by the Swiss poet Luisa Famos. Both in their different ways were hauntingly beautiful pieces. Pinnock’s I Am I Am, built around a two-line poem by Rachael Boast, has Fraser’s limpid soprano delicately embroidering rocking, Feldman-like string textures in which small gestures mean a lot, while the six songs in Holliger’s cycle underpin the soaring lyricism of Famos’s poems with intricately shifting lines. Neither work may be especially innovative or daring, but both are exquisitely crafted, lasting achievements.

• Holliger’s Increschantüm will be broadcast on BBC Radio 3’s Hear and Now on 30 November, and Cleare’s On Magnetic Fields on 7 December. The Huddersfield contemporary music festival continues until 24 November.

The ebooks library selection is an impressive one with The Online Publishers “TOP” platform and this hub offers services in multiple languages, more than 60 languages are available for different tasks and services through the platform.

Where to Find The Best Quality Translation Services.

4 Great Benefits To Advertising With TOP.

Buying Unique Photos Online From A Photos Gallery Through TOP.

Where You Can Find Ebooks To Read And Buy.

3 Reasons to Opt with TOP for Online Reputation Management Solutions.

4 Reasons TOP is The Best Option For Online Reputation Repair.

Getting The Best In Online Marketing With The Trend It Service.

Where You Can Get Paid As A Social Media Influencer Online.

3 Simple Ways To Make Money From Home With TOP.

How pay-as-you go energy systems could help with access to electricity in Africa.

Trump might not need to hear much to strike a truce with China: Senior official.

Anthony Scaramucci talks to Bill Kristol about trying to force Trump off the GOP ticket in 2020.

Who Is Winning The Offshore Solar Race?.