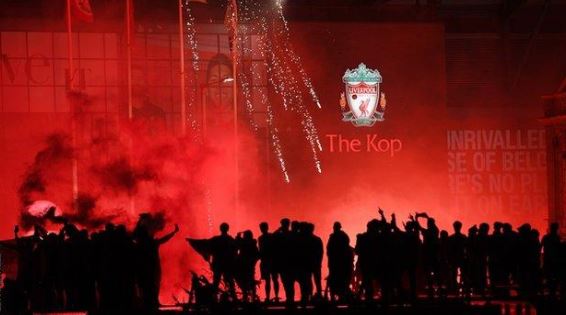 Fans gathered to celebrate outside Anfield

The fireworks started at Anfield long before that Premier League trophy was presented to Liverpool on the Kop – normally the beating heart of the club’s support but instead adorned by flags on this night of celebration.

Liverpool’s 5-3 win against Chelsea, a fittingly entertaining finale to their third successive unbeaten Premier League season at Anfield, was played out to the soundtrack of thunderous explosions, red lights in the sky and the smell of cordite.

And was that before Liverpool captain Jordan Henderson led the new champions, along with manager Jurgen Klopp and his staff, on to the specially built podium to officially signal the end of the 30-year wait to get their hands on this most prized domestic trophy.

It was symbolic that the trophy was handed over by the last manager to win it at Liverpool, Sir Kenny Dalglish, as friends and families looked on after receiving special dispensation to attend, although the game was played behind closed doors in front of limited numbers as is now the custom as a result of the coronavirus pandemic.

As the starter before the main course, Liverpool showed all the verve and resilience that has made them worthy Premier League champions to finally overcome a Chelsea side still chasing the point they need for a place in the top four.

It was an evening with a surreal tinge.

Before lockdown, as Liverpool ran away with the Premier League, the expectation was that the title would be celebrated inside a packed Anfield with the Kop in full voice.

Instead, Anfield anthem You’ll Never Walk Alone was accompanied by virtual silence as the players walked out, while the shouts of celebration from Liverpool staff members as they posed for photographs before the formal presentation could be heard echoing around the cavernous stands.

This was not the title celebration as Liverpool or their supporters wanted it – they all wished to be together, with Anfield a sea of red.

That was not possible, but they still relished every moment, and deservedly so.

It was only sad that so many supporters once again chose to ignore the urgings of Liverpool as a club, as well as Klopp and Dalglish, to stay away from the stadium, instead gathering in greater numbers as the game went on, forcing Merseyside Police to put a dispersal zone in place.

Inside, Anfield was plunged into darkness before a light show of rock concert proportions flashed around the stadium, Klopp and his staff leading the way before Liverpool’s players got their golden moment.

It was the sort of triumphant scene that was commonplace at Anfield during the 1970s and ’80s, when the team were regularly league champions. While there had been plenty of domestic and European success in the years since 1990, one honour eluded them – until now.

As Dalglish handed out the medals and then the Premier League trophy, he did it with his own name up in bright red lights on the giant Anfield stand that now bears his name.

The manner in which Liverpool first overpowered Chelsea, then ensured victory in the face of the visitors’ dangerous resurgence, offered another graphic demonstration that Klopp’s side possesses everything required to add more trophies.

On the podium, there were those such as Trent Alexander-Arnold, magnificent once again here, who will be part of the Liverpool fabric for years, then Adam Lallana, making his final Anfield appearance, bowing out with a title medal in his possession before moving on.

As Henderson took the trophy from Dalglish, who brought him to Liverpool from Sunderland in the summer of 2011, Anfield became a wall of sound and was bathed in red light and the colours of the spectacular firework display.

Klopp, the trademark baseball cap on backwards, had the sort smile that looked like it might have to be surgically removed as he cheered and pumped his fists for each player as they strode to the podium.

He is the man who has rebuilt Liverpool since his appointment in October 2015.

It took time for Klopp to reap tangible rewards with last season’s Champions League win, with the disappointment of losing the previous year’s final to Real Madrid and other losses in the Europa League final and EFL Cup final the fuel for those successes.

And when the strength and age of this Liverpool squad is examined, along with the talent of youngsters such as Curtis Jones and Neco Williams, this is something built to last.

Those of us who covered Liverpool’s last title triumph under Dalglish in 1990 would never have believed it would take 30 years to experience it again.

As the smoke cleared, the lights came back on and the red and gold ticker tape littered Anfield, You’ll Never Walk Alone was played again.

Football, as we have seen, is impossible to predict but it would stretch the imagination to believe that this Liverpool team under its leader Klopp will make their fans wait as long again to celebrate a Premier League triumph.

Then you can easily get started on asking TOP platform to become one of the trenders with them so that you can offer the service. Clients then will be able to connect with you and they will be able to offer you work that you can do easily from home, allowing you to make money online by engaging in this sort of online marketing.