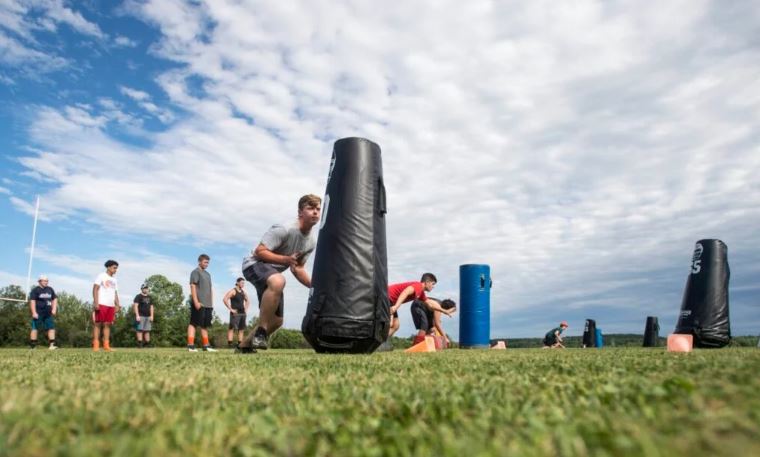 The Maine Principals’ Association’s 12-member Interscholastic Management Committee unanimously accepted the recommendation of the group’s Sports Medicine Committee to allow all sports – including contact sports such as soccer and football – to be played this fall during the coronavirus pandemic.

The Sports Medicine Committee had put together sport-by-sport guidelines to provide a safe return to high school sports. Now the state will review the MPA’s guidelines to make sure they comply with all of its COVID-19 safety guidelines. This is a change from 10 days ago, when a Department of Education spokesperson said “any decision about interscholastic sports will be made by the MPA.”

Time is growing short. The fall season is set to begin with preseason practices on Sept. 8.

“We have heard they need a little additional time to go through this, it is a pretty extensive document, including all the sport-specific recommendations,” MPA Executive Director Mike Burnham said. “I think that they know time is of the essence.”

Many high school observers had thought Thursday’s vote by the MPA would be the final say in the matter. The state’s review of the guidelines was unexpected and has added to the frustration of coaches and athletes seeking resolution. And some school administrators are upset with how the MPA has handled its decision-making process.

Burnham is aware that the state could ask for changes to the guidelines or even eliminate sports from being played. Agencies expected to be part of the decision making include the Department of Education, the Department of Health and Human Services, the Department of Economic and Community Development, and the Maine Center for Disease Control and Prevention, as well as the office of Gov. Janet Mills.

“This is a working document,” Burnham said of the report sent to the state agencies. “It is important to have input from all of those state agencies and our committee, based on feedback from them, will look at that and will discuss that. Certainly we want them to be a part of this.”

The governor’s office did not return a request Thursday seeking an interview for this story.

“School athletics are not exempt from the governor’s underlying requirements during the pandemic” Health and Human Services Commissioner Jeanne Lambrew said during the Maine CDC briefing Thursday afternoon.

Lambrew said DHHS officials had just received the recommendations from the MPA, and it will take time to go through them. She didn’t give a timetable for when the state will make a decision.

“We will certainly provide the Maine Principals’ Association with our views including on whether not (certain sports are) compliant with our underlying policies, and raising other questions and concerns we have,” Lambrew said.

Previously, state officials have said the final decision on high school sports rested with the MPA. On Aug. 18, DOE spokesperson Kelli Deveaux said in an email, “As we have throughout this pandemic, we will strive to work in a collaborative manner with MPA. Ultimately, any decision about interscholastic sports will be made by the MPA.”

The decision by the Interscholastic Management Committee capped a frenetic 10 days. On Aug. 18, the MPA delayed a decision on fall sports while seeking clarification from the state as to which guidelines it should follow: those of the Department of Education or the community sports guidelines set by the Department of Economic and Community Development.

Once the MPA received its guidance, its individual fall sports committees came up with modified COVID-19 safety rules, both sport specific and for a safe return to competition. Those guidelines, accepted Wednesday by the Sports Medicine Committee, are now being presented to the state for review.

Steve Bell, the principal at Dexter High and chair of the Interscholastic Management Committee, said the decision to accept the recommendation of the Sports Medicine Committee came down to trust.

Asked if he thought the guidelines would be accepted by the state, Burnham said, “I’m cautiously optimistic.”

Burnham is aware that there are those who don’t believe high school sports should be played during the pandemic.

“I think we developed a set of standards and guidelines that we feel allow for a safe return to these activities,” he said. “I think we would be remiss if we didn’t recognize that there are other entities out there, whether it’s at the local level or at the state level, that may not feel that we made the right decision.

“But I am very comfortable saying that we made the best decision that we felt we could, keeping the health and safety along with the social and emotional well being of kids in mind.”

Even if the state approves the guidelines, or allows only some sports to proceed, the decision to play ultimately will be made by local school districts. Already Camden Hills, which has the four-time defending Class A girls’ soccer champion, and Deer Isle-Stonington have opted out of playing in the fall.

“Today is not the end game,” Thornton Academy Athletic Director Gary Stevens said of Thursday’s MPA vote. “It’s a critical inning, but we haven’t gotten to the closer yet.

“Once the decision made, then individual school systems can react to the decision and determine whether they want to participate.”

And that is upsetting to some.

“I think we wait and see at this point in time, but some decisions need to be made in rapid order so that districts can plan,” Bailey said. “Some school districts have made a decision. … This will put superintendents and school boards in a tough spot, it could breed community dissent in that community when decisions are made.”

Bailey questioned how football, which has always been considered a high-risk activity, and soccer, which is considered high-risk by state guidelines but moderate risk by National Federation of State High School Association guidelines, received approval.

“I’m disappointed they went whole in with the full recommendation,” he said. “I have nothing against football, but it seems that’s not a place that they can keep the students safe the way they want to be.”

Burnham did note there was a discussion to move football to another season, but Maine’s long winter and mud season prevented it.

John Suttie, the RSU 23 superintendent and principal at Old Orchard Beach High, said it seems the MPA has established separate guidelines for athletics from other extracurricular activities, including music and band.

“That’s where superintendents are struggling,” said Suttie, a former high school football coach. “That’s where we have differences. Our singers and musicians are being treated differently than athletes. We’re coming from a point where from you can’t tell one group of students they can do what they love and tell another they can’t do what love.”

Burnham stressed Thursday that the MPA is working on guidelines for music, drama, debate and other after-school activities.

Maine isn’t the only state wrestling with the reopening of high school sports. In Pennsylvania, Gov. Tom Wolfe “strongly recommended” suspending all youth sports until Jan. 1, but the state’s high school association this week gave the go-ahead for fall sports. In Kentucky, Gov. Andy Beshear gave high school sports the go-ahead, but the Kentucky Board of Education will meet Friday to reconsider the plan to play. And in Connecticut, the state’s high school association announced plans to move forward with fall sports even as the state Department of Health recommended deferring football and indoor volleyball to another season.

The delay in a final decision is frustrating for many high school officials.

“I was caught by surprise. I had no idea that those elements were in place,” Gardiner Athletic Director Nate Stubbert said. “I think everybody that I’ve spoken to (Thursday) was under the same impression that I was, that we were going to have a definitive answer. Now we know that it’s going to go to other levels of government, other government agencies, for approval. And that’s kind of disappointing, frustrating.”

“I’ll tell you what, the longer this goes, the less and less chance things get played,” he said. “I don’t know what to believe anymore because they keep prolonging it every week. We’re running out of time.”

Among the materials the MPA sent to state officials were safety protocols that will be applied to all sports, including items on social distancing, wearing masks and sanitizing equipment. Locker rooms, for example, will be available to home teams only. The MPA is recommending that visiting teams arrive ready to play.

Some athletic directors can’t imagine locker rooms will be open at all.

The Online Publishers “TOP” platform serves as an international campaigner by offering an entire world of digital marketing and online publishing services, via extensive online channels and advanced digital tools.